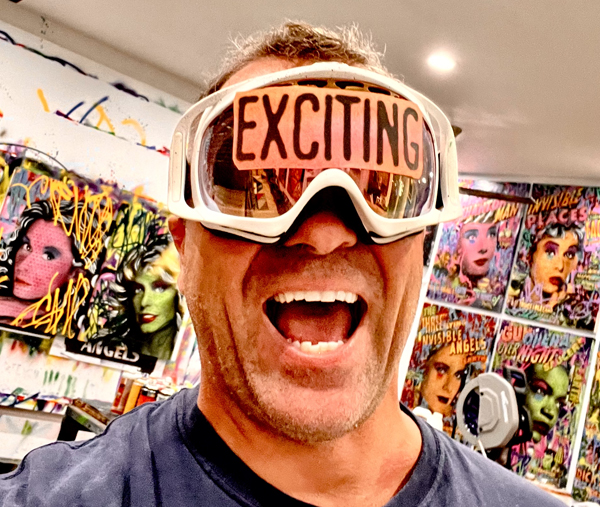 Rene Gagnon - Seen in his element

Rene Gagnon was enthralled by the rap and graffiti movement that originated in New York City in the early 80's. Gagnon found his calling in this movement.

"I was born in 1971 and raised in the city of Fall River, Massachusetts, a dusty mill town rich in culture located about 45 minutes south of Boston. I started drawing graffiti on my school book covers and piecing in railway tunnels in the early 80's after seeing the movies, 'Wild Style' and 'Beat Street'. My thirst for creation truly exploded after seeing the graffiti art from the streets of New York City in those movies. The enormity of the works and the care free expression of color displayed a means by which I could gain the attention that every teen is so desperately seeking. This rebellious idea of searching for your identity through the use of markers and spray paint fueled my desire to follow in the footsteps of a graffiti artist.

In 1986 I met a graffiti artist (STER) from the Bronx. STER opened my eyes even more to what it meant to be a true writer. Together we created my tag: SNO. Armed with an alias I started to truly bomb my environment. I was considered to be the most widely recognized graffiti artist/tagger in Southeastern, MA from 1986-1993. I believed I gained this recognition because I always had a thirst for taking aspects of my life to the Nth degree.

I now find myself at a point in life where I am beginning to see through the spray paint haze of my teens. I now realize that an artist's work should represent their soul. So, through the use of urban media techniques I used as a teenager, a newfound love for creating street art, and my need as a human to create I am attempting to bridge the gap between urban graffiti/street art and contemporary abstract expressionism.

In almost every city graffiti and street art is present in a multitude of forms. Some artists choose the permanency of spray painted tags, throw-ups, and stenciled imagery, while others opt for the immediacy and aging characteristics of stickers and paste ups. Often times, these artists' of the street will battle with each other for visibility on the same surfaces. Over time, the multiple transformations of these surfaces reveal an abstract maze of color and composition that I see as an opportunity. The opportunity to create something much greater than what meets the eye.

My vision is to recreate this battle between graffiti and street artists' in my studio work. By mixing my past graffiti experience with the street art pieces I do today, I am able to fuel my attack on the canvas. As feelings are evoked from the written words and the often emotionally charged imagery I leave on the streets a physical manifestation builds to a point of overflow. Ultimately unleashing itself in a furor of uninhibited energy, where time and place become nonexistent. It is in this vitality that my artistic soul reveals itself and dances its way into a flurry of whirling paint and exploding spray paint cans.

I believe this melting of the graffiti/street artist in me with the abstract expressionist produces an original take on two major art forms. I have coined this amalgamation 'Post-Graffiti Abstract Expressionism' and it serves as the backbone to my work."

We would be happy to facilitate the acquisition of an original Rene Gagnon artwork. Contact Us Today!